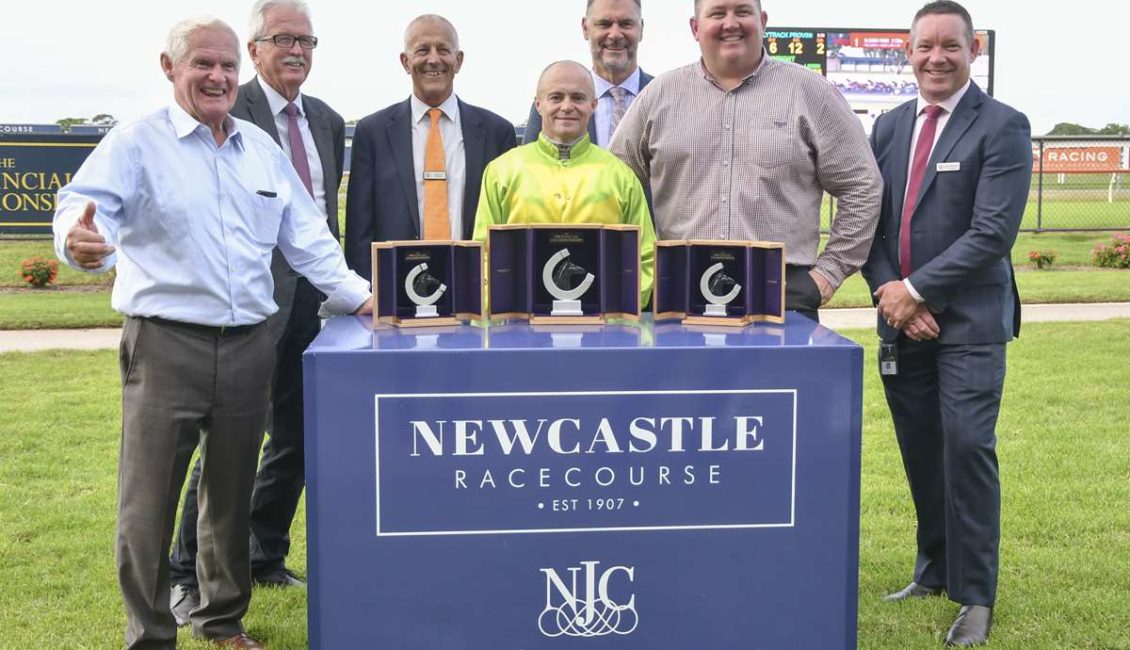 Port Stephens mare Oakfield Missile snatched victory in the shadows of the post in Saturday’s Provincial Qualifier at Newcastle Racecourse.

Th 1400-metre Newcastle Qualifier was the first of the 2020 series and it produced the closest finish in the history of the race. Oakfield Missile only had three horses behind her on the home turn when Darryl McLellan eased her to the outside of the field. Inside the 200-metre point Wyong three-year-old Designated sprinted to the lead and looked home for all money.

Andrew Gibbons eased the $4.60 favourite Stella Sea Sun away from the rail halfway down the straight and she was finishing quickly. Just when it appeared that designated and Stella Sea Sun were going to fight out the finish Oakfield Missile sprouted wings.

Opinions were divided as to which of the two had won the race before Oakfield Missile’s number went into the frame.

The winner is raced by former Port Stephens Mayor Bruce Mackenzie and trained at Wyong by Damien Lane. There was jubilation after McLellan had weighed in as he came out into the mounting yard and threw his arms around Mackenzie. The latter in his usual confident mood yelled “she will win the final.”

For Lane, a former Coonamble Bears front rower who arrived in Wyong in 2007, it was his most important win. “When I left Coonamble, I had only been training a couple of months. The first two years in Wyong I did not train but broke in horses and worked for trainers.

I started training with two horses, then four, and now I have thirty-five horses in work. I am thrilled to win this race for Bruce Mackenzie and my wife Kate. I have 6 -10 horses in work for Bruce all year round and he is a great supporter. Kate rides trackwork and is the backbone of the stable.

Oakfield Missile finished second in the Newcastle Qualifier last year and then finished fourth in the Final at Randwick. I must thank Newcastle Jockey Club for allowing Oakfield Missile to gallop between races at a recent meeting. I am so happy for Digger McLellan who has been coming to Wyong to ride this mare and others in work.

I have won a Taree Cup, but today’s race was with more money and this is my most important win. I am rapt,” Lane said.

Stella Sea Sun was gallant in defeat and she will be fitter come Final time.

Kristen Buchanan the trainer of Designated believed she had won the race but after the placings were semaphored, she was proud of her three-year-old. Kris Lees had to be content with second place with Stella Sea Sun in the Provincial Qualifier, however he notched up a double at Newcastle.

Snitzel filly Snitzari confirmed her potential with an all the way in the 900 metre 2YO Maiden Plate. Lees trains the filly for Australian Bloodstock and jockey Andrew Gibbons was impressed. “A promising filly. I didn’t have to lead but she had barrier two and I took advantage of the draw,” Gibbons said. Lees and Australian Bloodstock combined to land Game Of Thorns a winner in the 1400 metre Benchmark 64 Handicap. The lightly raced filly produced the run of the meeting to come from near last on the turn to win the 1400 metre Benchmark 64 handicap by a nose.

Koby Jennings the rider of the runner up Cafe Royal was suspended for six weeks after being charged with failing to ride his mount out approaching the end of the race. In the opinion of the stewards it cost Cafe Royal first place.