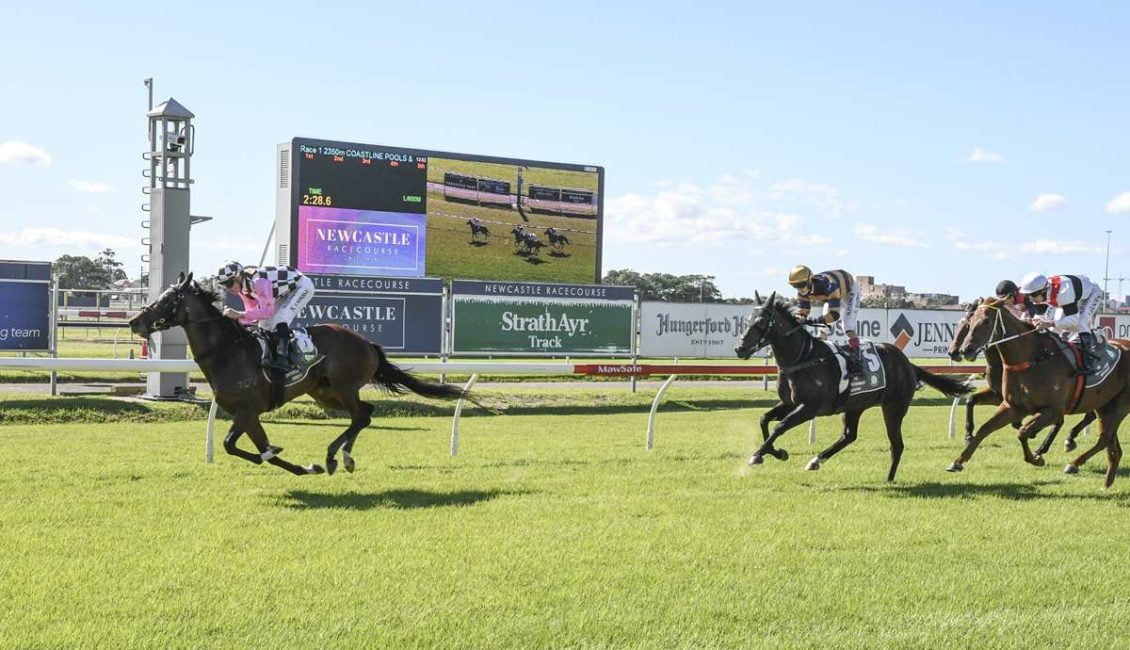 Classy three-year-old filly Stick ‘Em Up will head to Adelaide to take on Group company after her easy win at Newcastle Jockey Club’s race meeting on Saturday. The Randwick trained stayer contested the 2350 metre Class 1 and Maiden Plate and the filly was a $1.65 favourite after finishing fifth in the Group 1 ATC Oaks and Group 3 Adrian Knox in her two previous starts.

Stick ‘Em Up was allowed to find her feet early in Saturday’s race and she settled in the back half of the field. Lord Tropicana made sure it was a truly run stayers event when he made a mid-race dash to set up a huge lead. Keagan Latham started to ease Stick ‘Em Up off the rail near the home turn and she started her winning run at the top of the straight. The filly raced away to win by more than two lengths running away.

Former New Zealand trainer John Sargent, a master trainer of fillies, puts the polish on the winner. “This is a stout staying filly with a bright future. She was ridden upside down in the ATC Oaks early last month when the jockey shot her around the outside of the field to lead by four lengths.

Stick ‘Em Up did well to hang on and finish fifth. It has been three weeks since the ATC Oaks and I needed to run her again before going to Adelaide for the Group 3 South Australian Classic a 2500 metre race for fillies. That race will be run in two weeks and today’s run will top her off,” Sargent said on Saturday.

Sargent who trains at Randwick these days is the only trainer in history to win four Group 1 Oaks events at four different venues. He won the 2012 Queensland Oaks with Quintessential, the 2013 Victorian Oaks with Kirramosa, Miss Mossman saluted in the 2014 New Zealand Oaks and Gust Of Wind beat Winx in the 2015 ATC Oaks.

Keagan Latham brought up a treble for the meeting when he piloted the Paul Perry trained Fanciful Dream to an impressive victory in the 1200 metre Benchmark 64 Handicap. The filly was slow to move and Latham set her alight and she dashed around the field to lead. It was a tough win as she fought off the challenges down the straight. Fanciful Dream was unlucky in her previous start at Gosford. The second leg of Latham’s trio came in race 2 when he partnered with Jason Attard and Lucy Keegan-Attard to steer Psicoptico to victory.

Newcastle’s premier jockey Andrew Gibbons combined with Peter and Paul Snowden to win the 1200 metre Fillies and Mares Maiden Plate with Skybella. The three-year-old filly sat outside the leader before taking the lead halfway down the straight and toughing it out to win narrowly.

With thee months to run in the 2019-20 season the following is the standing in the Newcastle Premiership.