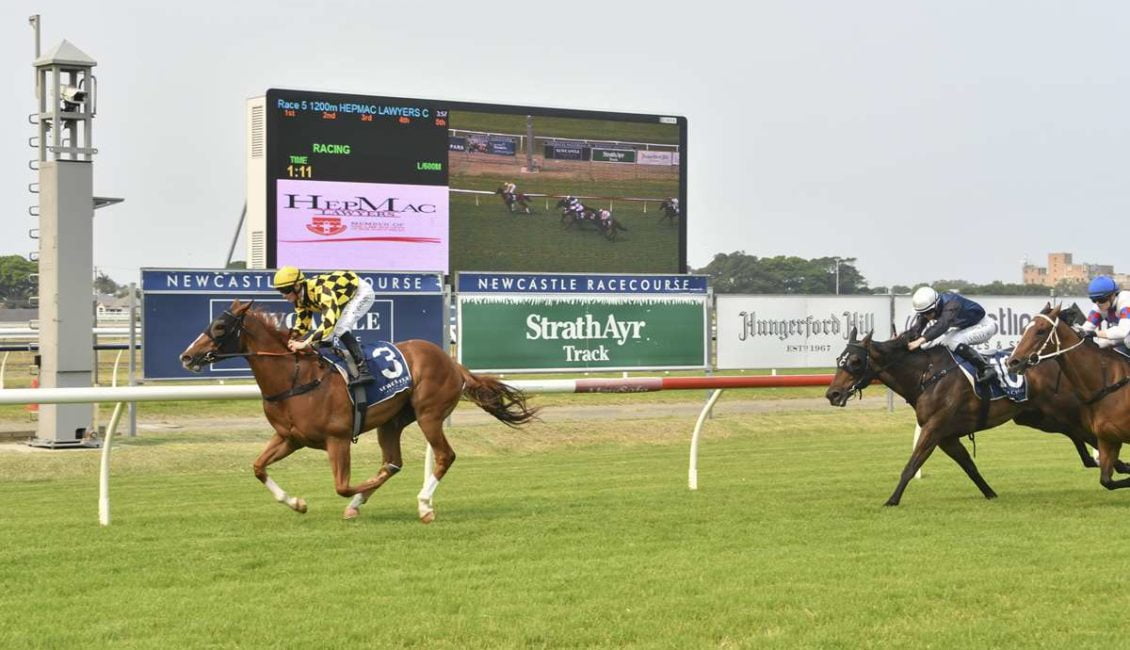 Boom Irish apprentice jockey Tom Sherry steered home three winners at the Newcastle Racecourse on Saturday to bring the 21-year old’s season tally to twenty-four. Sherry is in keen demand after a great start to his Australian career only three months ago. Scone trainer Paul Messara booked Sherry to ride his cracking three-year-old Powertrain in the 1200 metre Benchmark 70 and the young Irishman produced a superb front running ride. “No other jockey wanted to lead so I let Powertrain slide and we got away with some slow sections. He is a bold strider and where I gave him a kick at the 300, he accelerated and bolted in. This is a very good horse and to win like he did ridden upside down was a credit to him,” Sherry said on dismounting.

Messara was elated with horse and rider. “Powertrain is unbeaten in all three starts this preparation. Today was the biggest test to date and he was superb. They walked early in the race and sprinted home in 32.48 for the last 600 metres. Tom showed initiative to lead on a horse that normally drops back. A top ride, I will have to think now about his future.

I may go to the Gold Coast for the Country Cup a $250,000 race over 1400 metres a week before the Magic Millions Day. I have to be careful with Powertrain as I want to run him in the NSW Country Championships heat at Tamworth in the New Year. At present he has won four races and if you win six your horse is ineligible to run in the Country Series. I have two other Country Championship horses Luna Mia and Deepwood Vale. Luna Mia was unlucky in the Kosciusko and Deepwood Vale has won two from four,” Messara said.

Sherry combined with the Freedman brothers to bookend the eight-race program. They combined to win the 1885 metre Benchmark 64 Handicap with promising stayer Our Fun. The mare was desperately unlucky when a close second at Gosford last start. Sherry settled her in the first three and she took the lead at the top of the straight and Our Fun raced away late.

Will Freedman represented the stable, “We expected that performance, she should have won last start and she always travelled like a winner today. Our Fun will probably go to a Mares race in town. Tom said she was inclined to wait when she hit the front then she put her head down and raced away,” Freedman said.

The Freedman – Sherry combination were back in the winners stall after the 1300 metre Class 1 Handicap. Four-year-old mare Outback Diva outclassed her rivals after racing outside the leaders. It was the winners second success from six starts with three placings. She had a tendency to be slow away earlier in her career, but Sherry said the barrier blanket this prep is the reason Outback Diva is beginning fast.

Three-year-old filly Circus made a successful debut in the 900 metre 3YO Maiden Plate. The Lonhro filly had a dream run behind the two leaders before racing clear late. Jockey Mitchell Bell said after the race she was always going to win when she landed in the box seat. “I had an easy ride after she landed behind the two leaders. Circus is promising and will appreciate 1200 metres,” Bell said.