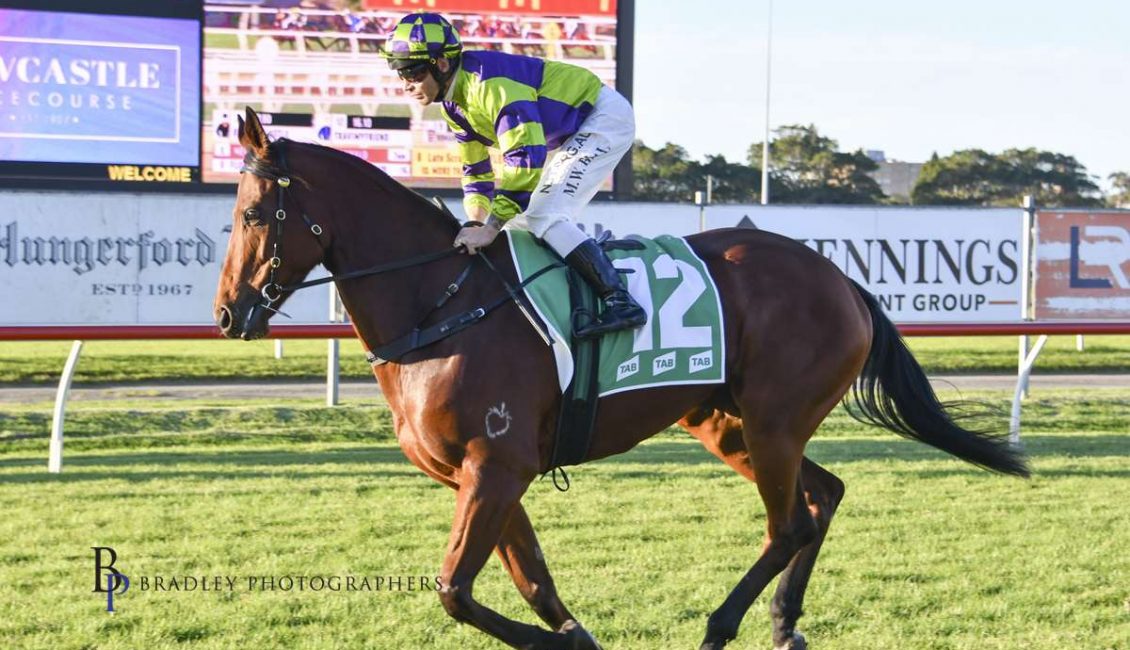 Richly talented Newcastle mare Strawb barred from racing until she trialled satisfactory twice after her previous start was on her best behaviour when a brilliant winner at Newcastle on Saturday.

The four year old is currently trained at Newcastle by Nathan Doyle her third trainer in her five start career in which she had won three. She was bred by John Singleton who owned her when she was beaten 17 lengths in her first start at Newcastle in February 2019.

Strawb was moved to Armidale trainer Stirling Osland for her second start. The blueblood mare had one start for Osland and that resulted in a close win at Coffs Harbour in August 2019. In April 2020 Strawb had an eventful first start for Doyle when she missed the start at Scone yet won by 2 ¼ lengths. She was 10 lengths off the lead near the home turn.

On April 21 Strawb missed the start by 10 lengths at Scone before finishing fifth a length from the winner.

Stewards acted immediately and told Doyle his mare would have to trial satisfactorily in two trials before being allowed to race again. After two satisfactory trials Strawb stepped out in a 1400 metre Class 2 Handicap at Newcastle on Saturday. as heavily backed $2.70 favourite the mare was on her best behaviour steering her rivals by 2.30 lengths.

Doyle was a relieved man “that’s a relief. She was good in the barrier today. I asked the barrier attendants to keep away from Strawb once in the barrier. She is a huge mare and doesn’t like people hanging onto her when in the barrier. Our team have done so much barrier work with her. Three times we have put her in the barrier this week. The mare was mated with a stallion a couple of times but did not get in foal. That is why she came to my stable. Matthew Sandblom her owner paid $80,000 for her off John Singleton” Doyle said.

The other Newcastle trained galloper to win at the Newcastle meeting delivered a knockout blow to punters and eliminated the majority of punters from the TAB Quadrella.

Paul Perry’s two year old Ficheur at the ripe old odds of $101 (TAB$123) stormed home to win the 1200 metre Maiden Plate first leg of the TAB Quadrella. Ficheur a son of former champion stayer Dundeel had trialled okay but was friendless with punters in a quality race.

The states winning apprentice in the current season Tom Sherry took his season tally to 91 winners when he steered John O’Shea’s colt Quantico to victory in the 1200 metre Class 1 Handicap. The classy 3 year old produced a barnstorming finish to come from the tail of the field to win by 2.8 lengths. The colt a son of champion sire I Am Invincible is raced by some of the big players in Australian Racing. China Horse Club, Segenhoe Stud, Neil Werrett, Yarraman Park Stud and the Mitchell brothers share in the ownership.