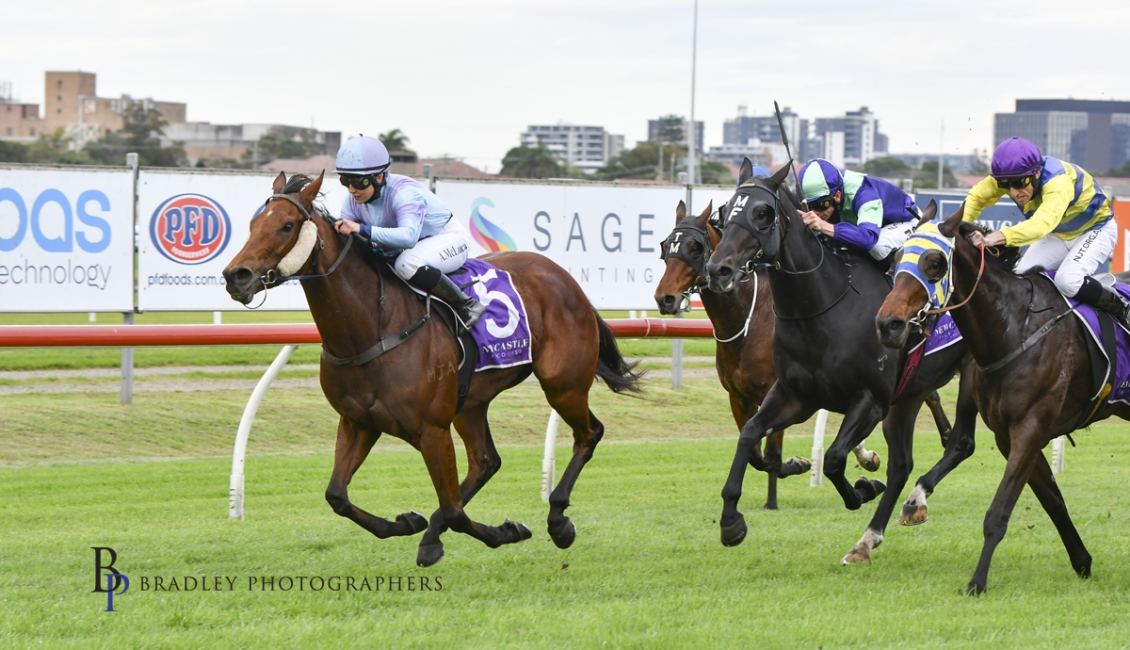 Apprentice jockeys had a field day at the Newcastle race meeting on Saturday riding the winners of half of the eight race program. Saturday’s meeting was scheduled for Kembla however heavy rain in recent weeks made the South Coast track un- raceable and the Newcastle Jockey Club came to the rescue.

22 year old Amy McLucas on loan to Randwick trainer John Thompson was the start of the hoops landing a double. McLucas had her first ride for Scone trainer Jeremy Gask aboard blueblood mare Orbital Express in the 1890 metre Benchmark 64 Handicap. Heavily backed into $2.60 favourite Orbital Express was clearly the best horse in the race however, she is a terribly slow starter. After a tardy beginning the mare settled in an awkward position on the rail near the tail of the field.

McLucas had difficulty in securing clear running in the straight on two or three occasions however, when she got a split she ran away to win by more than a length. McLucas was relived but excited on returning to scale.

“Mr. Gask instructed me to get this mare to the outside but I couldn’t and it was an ordinary ride. Orbital Express was very impressive and will run a strong 2000 meters” the apprentice said.

The winners dam Avoid Lightning was a vey fast sprinter and her sire Zoustar is one of racings top stallions.

Canberra trained Washington Towers was McLucas’ other winner in the 900 metre Benchmark 68 Handicap. A very fast short courser the 5 year old won his fourth race from five starts this preparation. McLucas allowed Washington Towers to sit outside the leader Hold On Honey before surging clear to win by 1.37 lengths. An elated McLucas was full of praise for the winner.

“He is a smart horse and felt like he was always going to win. The two wins were my first at Newcastle. I Have now ridden 87 winners and now I am with John Thompson I expect to ride regularly on this good big track” McLucas said.

Godolphin’s new apprentice Zac Lloyd made his first visit to Newcastle and he had a busy day. The 18 year old had 6 rides and left the track with a winner and three placings. The South African born apprentice was successful on the James Cummings trained Huion which was unextended to win by 2 lengths in the 1200 metre Maiden Plate.

Newcastle apprentice Bailey Wheeler rode his thirty third winner for the season when he steered Dubai Showgirl in the 1600 metre Maiden Handicap.