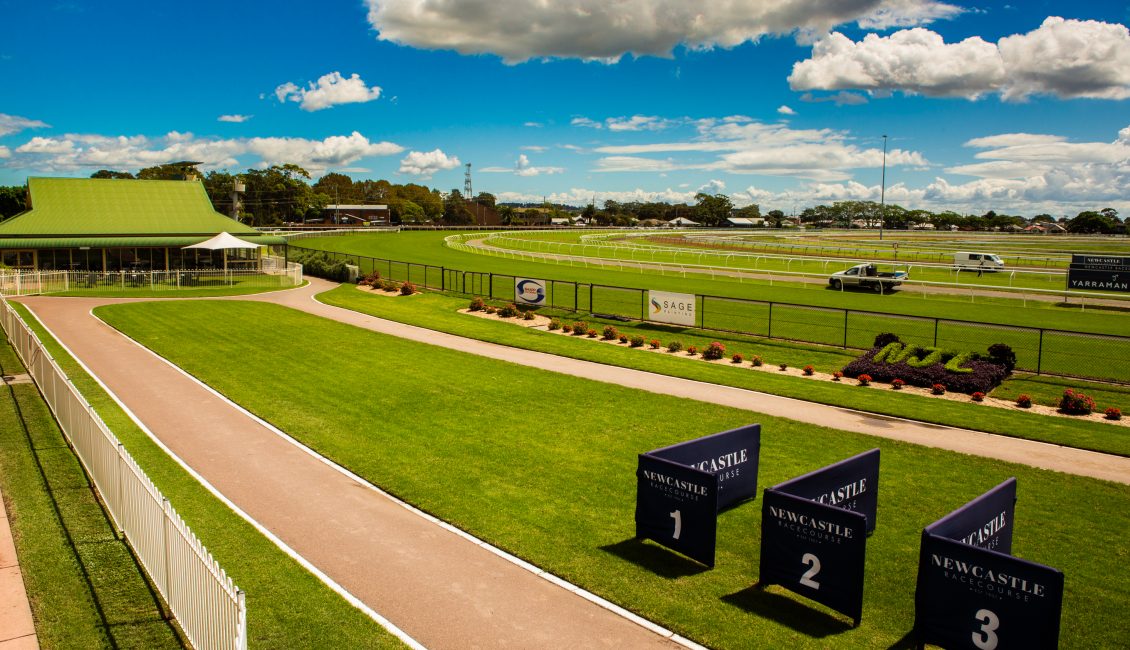 150mm of torrential rain in the lead up and on the scheduled race day forced the postponement of the Jungle Juice and Cessnock Cups race meeting on October 26. Visibility and flooding of the club’s carparks prevented the meeting from proceeding – incredibly, the track was still a Heavy 8.

Fortunately, the meeting was rescheduled for the following day and both cups were won by multiple Group 1 winning trainers. It was only the second year in its forty-year history the Jungle Juice Cup was not run on the NJC’S Hunter-based Cessnock track. Back in 2013 the Cup was transferred to Scone because of heavy rain.

The recent transfer of the Cessnock Racecourse to Racing NSW, has resulted in all Cessnock meetings being transferred to the Beaumont track at Newcastle Racecourse on Mondays, however, with heavy rain forecast in the days leading up to the 2020 Jungle Juice and Cessnock Cups meeting, the NJC were granted permission to conduct the meeting on the sand-based Newcastle course proper.

Aaron Bullock rode the winner and it was his first Jungle Juice Cup win. General Soho finished fifth in the Provincial Championships Final at Randwick in April and the Jungle Juice Cup win was his sixth and took his racetrack earnings to a handsome $173,000.

Progressive stayer Unamerican, a raging hot $1.30 favourite, made short work of the opposition in the East Cessnock Bowling Club Cessnock Cup. A son of Melbourne Cup winner Americain, his three wins to date have all been on the Newcastle track. Unamerican is trained by Richard and Michael Freedman.

On Newcastle Cup Day, top trainer John O’Shea described the Newcastle track as the best in Australia. This is a great rap from an industry leader, however, the track’s performance on Jungle Juice Cup day led to additional claims from participants that it was the best wet-weather track in New South Wales.

91 millimetres of rain fell on the Newcastle course proper’s surface the day before the race meeting, with a total of 150 millimetres (or 6 inches in the old terminology) received in the three days leading into the meeting. The track was rated a ‘conservative’ Heavy 8 at 7.30am on race morning and upgraded to a Soft 6 by race four. It was most likely a Soft 5 by the end of proceedings.

Newcastle rising star The Bopper, was sent to the paddock after his brilliant win in the Listed Brian Crowley Stakes at Randwick on October 24. Trainer Kris Lees said after the win that the Nicconi three-year-old will have one lead up run into the $1Million Inglis for three-year-old’s in February. The Bopper was purchased for $30,000 at the Inglis Scone Yearling Sale by Kiera Moore on behalf of Kris Lees. The syndicate that race The Bopper include Lees’ wife Kristy and his mother Vicki and her close friend Gale Mooney.

The Bopper is named after former Newcastle Police Chief John Mooney who was known as The Bopper. Mooney passed away a couple of years ago and when the horse was named, Vicki Lees and Mooney’s wife Gale joined the syndicate.

Lees was aware of The Bopper’s talent at an early stage and he has placed him magnificently. The Bopper debuted in the North-Wests feature two-year-old event the Romantic Dream at Tamworth on April 26. He came from well back early to win by two lengths in track record time. Next run was in the $104,000 Inglis Challenge at Scone in May and he won by four lengths in near record time. The Bopper resumed at Canterbury on October 5 and he was beaten a head in record time. He bolted in with the Brian Crowley posting 1-10.11 for the 1200 metres on a soft 6 track.

Mugatoo – A Star that will continue to shine

The Australian Bloodstock imported galloper Mugatoo has had a stellar twelve months under the care of Kris Lees. The six-year-old had two progressive wins from his six starts in Europe over 2922 and 2334 metres before he was sold to Australian Bloodstock. Since arriving in Newcastle, Mugatoo has had 10 starts for six wins and a close second in the Group 1 Metropolitan.

He made his Australian debut in a Randwick Benchmark 88 over 1600 metres on January 25 which he won narrowly, before a comfortable victory on the Kensington track in a Benchmark 76 over 1800 metres on February 19. The gelding then travelled to Canberra for the 2000 metre Canberra Cup and notched up another easy win. Mugatoo returned to Sydney to go down by a length in the 2400 metre Rosehill Manion Cup.

After failing in the Group 1 Tancred at Rosehill on March 28, he was sent to the paddock. Resuming with a win in the Winter Challenge (1500m) at Rosehill on July 25, Mugatoo followed up with four outstanding performances. He won both the Group 3 Rosehill Premier and the Group 3 Newcastle Gold Cup (2300m) before being beaten a head in The Metropolitan (2400m) at Randwick.

His last run of the Spring was in the Group 1 Cox Plate at Moonee Valley, when he was trapped three-wide the trip and still finished a gallant fourth. Mugatoo has won $958,392 and he will be back in the Autumn.

Popular Newcastle race caller John McDermott passed away on November 2 aged 75. ‘Macca’ as he was affectionately known, called his first meeting at Singleton greyhounds in 1963.

He called meetings of all three racing codes until September last year and was the on-course caller of the thoroughbred meetings for 20 years. He is survived by his wife Susan, daughter Kylie and four grandchildren.

The funeral service was held at the Newcastle Racecourse.

Newcastle Jockey Club Chairman Geoff Barnett was made a Life Member of the Club at their AGM in October. Barnett, born and bred in the Lower Hunter Valley at Maitland, is a successful businessman and has been a member of the NJC since 1998. He was elected to the Board in 1999 and has been the Chairman since 2011.

Barnett and his wife Maureen have been staunch supporters of the highly successful Hunter syndicators Australian Bloodstock. “Maureen and I have been part-owners of many of the Australian Bloodstock horses including their current start Mugatoo. Big Duke was a very good stayer for us winning $2Million on the track.

Two other horses very close to our hearts are Tosen Stardom which won two Group 1’s, and Red Cardinal who gave us a great thrill in 2016 when he won in New York at a meeting we attended. The Newcastle Jockey Club has come a long way in recent years and is going from strength to strength. The ‘Race Fields Legislation’ was huge for the racing industry in NSW and both our new race day stalls and the planned 500 x stable development will be a great go-forward for the Club. It will set the NJC up for decades as far as stables go.” Barnett said.