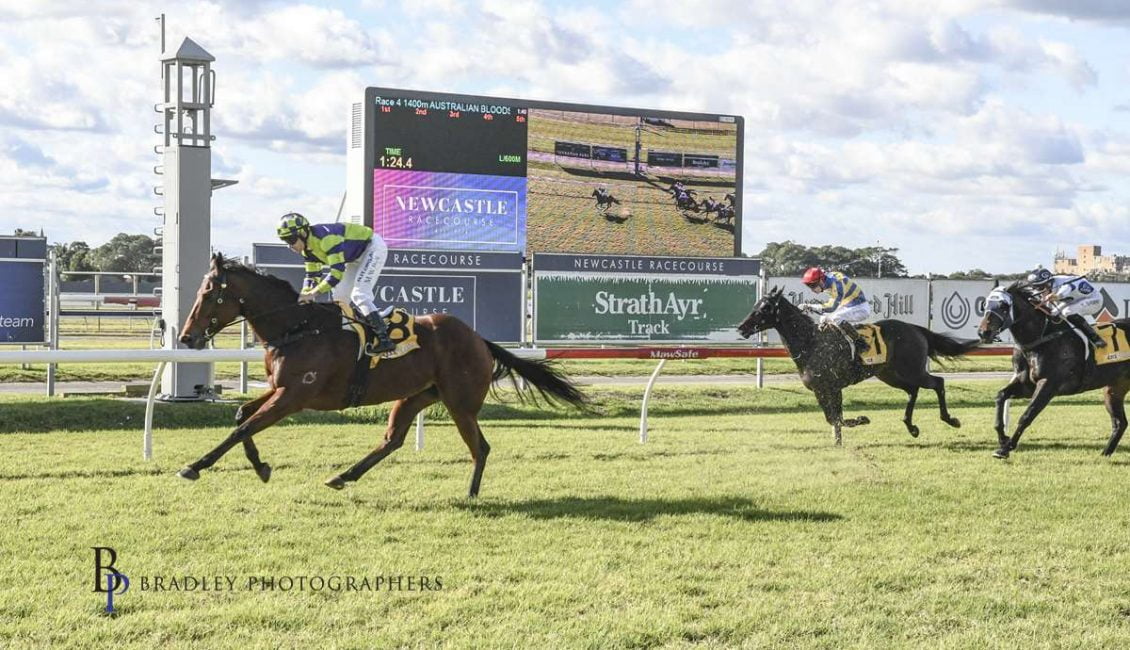 Newcastle rising star Strawb and her stablemate Royal Banquet were the punters pals at Saturday’s Newcastle race meeting when the pair outclassed their rivals in their respective races.

Three-year-old Royal Banquet was the first of the pair to face the starter in the 1300 metre Sharp Electronics Group Class 2 Handicap. Backed from $2.20 into $1.95 Royal Banquet began well and after racing at the leaders heels, he dashed clear at the 200 metres to win comfortably. The winner has won three from four and is undefeated in two starts for Newcastle trainer Nathan Doyle.

Strawb was all the rage In the 1400 metre Australian Bloodstock Benchmark 76 Handicap. Backed from $1.80 into $1.40 the ‘big mare’ jumped in front from the rails barrier and Jockey Mitchell Bell settled her in the box seat on the rail behind the leaders. Strawb eased out around the three leaders at the top of the straight and she exploded shortly after to win by 3¼ lengths.

She is an exceptional mare but the four-year-old had a major problem when she joined Doyle’s stable. Strawb refused to jump with her opposition. In her first start for Doyle at Scone on April 6 she won the race after missing the start by 10 lengths. Stewards barred her after she again missed the start badly in her next start at Scone. After two satisfactory trials the mare bounced back with an easy Newcastle win on June 20 before Saturdays impressive victory.

Doyle has trained 27 winners this season and he was an excited man on Saturday. “Royal Banquet is a very progressive horse and Koby Jennings suggested he may need blinkers, he said the horse pricked his ears when he hit the front. He needs something to chase. Royal Banquet has the potential to become a Saturday metropolitan horse. Strawb is untapped and is getting better and better. She will be a Group horse, looks like we have rectified her barrier manners and she actually jumped in front today.

She has been a cheap buy for owner Matthew Sandblom and she definitely will not go stud this season. I will talk to Matthew this week and we will decide if we pull the pin on this preparation and spell her,” Doyle said.

Leading Randwick trainer Mark Newnham was in attendance to see his promising stayer Somnus trounce his opposition in the 1880 metre Red Funnel Benchmark 64 Handicap. The New Zealand bred three-year-old, a son of Cox Plate winner Savabeel, has been runner up in his only two starts this preparation. However, the longer trip on Saturday was more suitable and Somnus is a potential metropolitan class stayer.