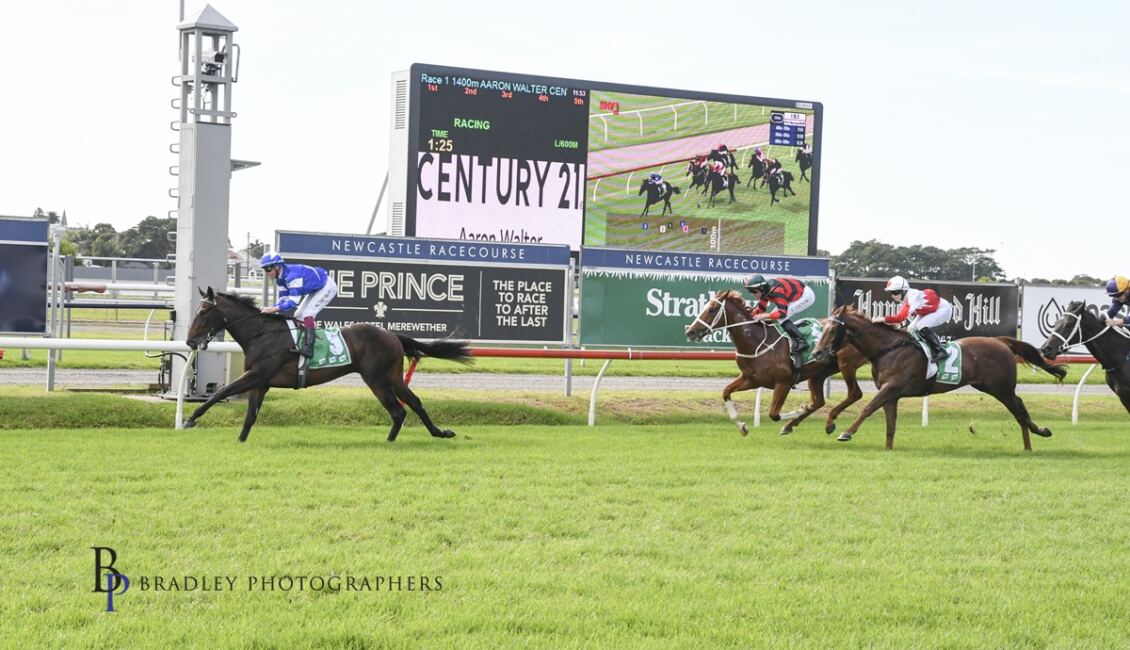 Rosehill trainer Gerald Ryan is eyeing off at a crack at a Group 1 race during the Brisbane Winter Carnival with his talented 2-year-old colt Sinba following the youngsters brilliant debut win at Newcastle on Saturday. The gelding, a son of former New Zealand star Xtravagant, had performed impressively in two Sydney barrier trials in April and Gerald Ryan and co-trainer Sterling Alexiou chose the Newcastle track with its long straight for the strapping 2-year-old to make his debut.

Backed in from $3.70 into a dominant $2.30 in the 1400 metre Aaron Walter Century 21 Edgeworth Maiden Sinba, with Keegan Latham aboard , settled near the tail of the eight horse field. At the top of the straight the field fanned and Latham steered the favourite into the clear.

He gathered the leaders in and then he sprinted away to win by more than two lengths. Ryan’s expectations are high “I have had a huge opinion of this bloke for some time. He is a big fellow but richly talented. We decided to start him off at Newcastle because it was such a great track.

Sinba will probably run again at Gosford in a couple of weeks and all going well we may give him a crack at the Group 1 JJ Atkins at Warwick Farm on June 12” Ryan said.

Classy Newcastle mare Café Royal resumed from a spell with an effortless all the way win in the 1200 metre John Whitmore Memorial. Trained by Nathan Doyle, the daughter of champion sire Snitzel was clearly the best horse in the race, and with boom apprentice Dylan Gibbons 3 kilogram claim she was very well placed with 58 ½ kilograms.

The mare won by 2.91 lengths in a dominant display of front running. Doyle was not surprised by the ease of Café Royals win “She is very smart and she indicated that she was back to her best in two recent trial wins.

Dylan rides a lot of work for me and realistically I feel guilty being able to put him on and claim 3 kilograms. He is such a talent” Doyle said.

Sky Racing commentators at Newcastle claimed “As far as apprentices go Dylan is the next big thing in NSW racing”.

Dylan in his first season has ridden 53 winners.

Jockeys Keagan Latham and Jean Van Overmere both landed doubles at the meeting. Latham with a career best 83 winners for the season rode Sinba in the opening event and the heavily backed Indigenous in the Newcastle Skin Check Maiden Handicap 1250m.

Trained by John O’Shea the mare was winless in eight previous starts however, she was trialling well leading into Saturday’s race.

Overmeres’ two winners Explosive Truth and Mensa Missile are both trained by Gai Waterhouse and Adrian Bott and both led throughout.