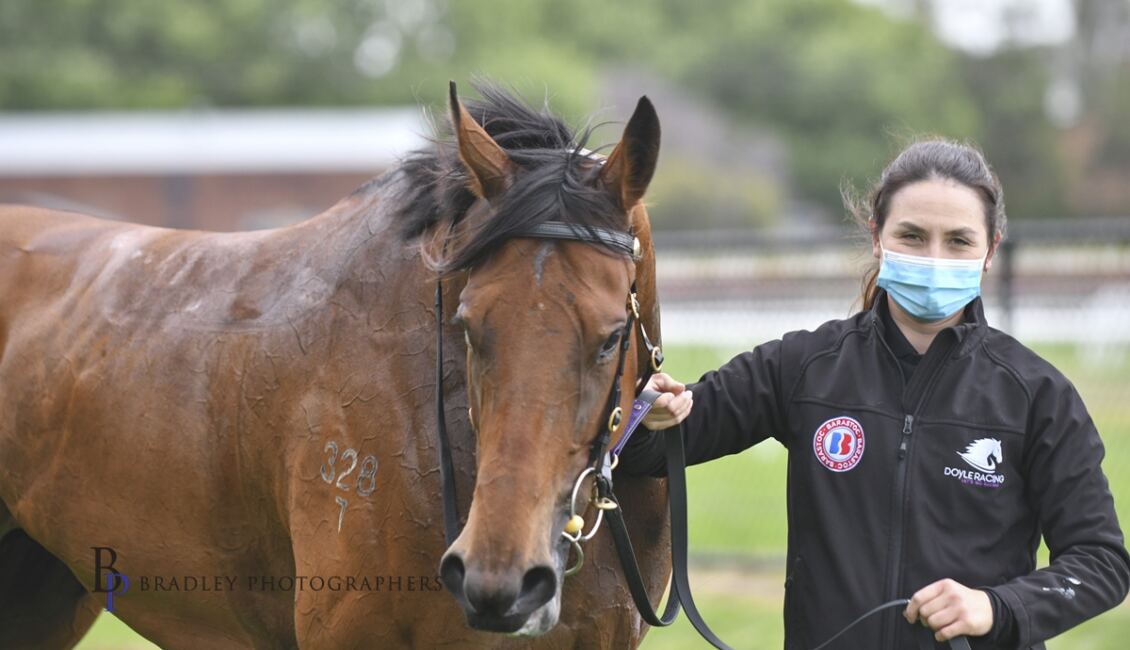 Fifty six millimeters of rain fell on the Broadmeadow track in the 48 hours prior to the race day however, the NJC’s magnificent track stood tall with the original rating of a soft 6 then, following showers through the day a soft 7.

The Sharp Office Class 1 Handicap(1300m) featured the first appearance on her home track of Nathan Doyle’s New Zealand bred mare Norwegian Bliss. The four year old is raced by her breeder retail giant Gerry Harvey and she is unbeaten in two starts.

Norwegian Bliss bolted in on debut at Port Macquarie on September 26. On Tuesday she was a raging hot $1.55 favourite. Ashley Morgan took her to the front soon after the start, she raced away in the straight to win by 3.77 lengths. “Norwegian Bliss was sent to me by Mr Harvey on the recommendation of his racing manager Luke McDonald, James brother. She had issues in the past which delayed her racetrack debut. This mare is city class and has plenty of improvement in her” Doyle said.

David Atkins has a promising 3 year-old in his stable called Contributing Factor, brilliant winner of the OAS Technology Class 1 Handicap (1300m). In his fifth race start the gelding was last with 250 metres to run before unleashing a terrific turn of foot to win by 1.19 lengths. It was his second win and Newcastle apprentice Dylan Gibbons who rode the winner was full of praise. “That was an outstanding win because with the rail out 10 metres they don’t usually come home from last to win like she did” Gibbons said.

It was an emotional win for Newcastle Mark Minervini’ s stable when his mare French Response, won the final event the New Zealand Bloodstock Benchmark 68 Handicap (1600m). The mare has won from 1400 metres to 2100 metres and on Tuesday she was second up.

Minervini booked Dubbo apprentice Liam Blanch her regular rider, to ride her. French Response came from the tail of the field to make her run down the outside fence. She gathered in the favourite Miss Scalini in the shadows of the post.

Minervini a former Adelaide trainer was interviewed by Sky Racing prior to the race and said it was an emotional day “Phil Cooper an Adelaide friend and part owner of French Response passed away at the weekend. Liam Blanch is wearing a black armband in the race.

It is an emotional day and it will be great if French Response wins” Minervini said.