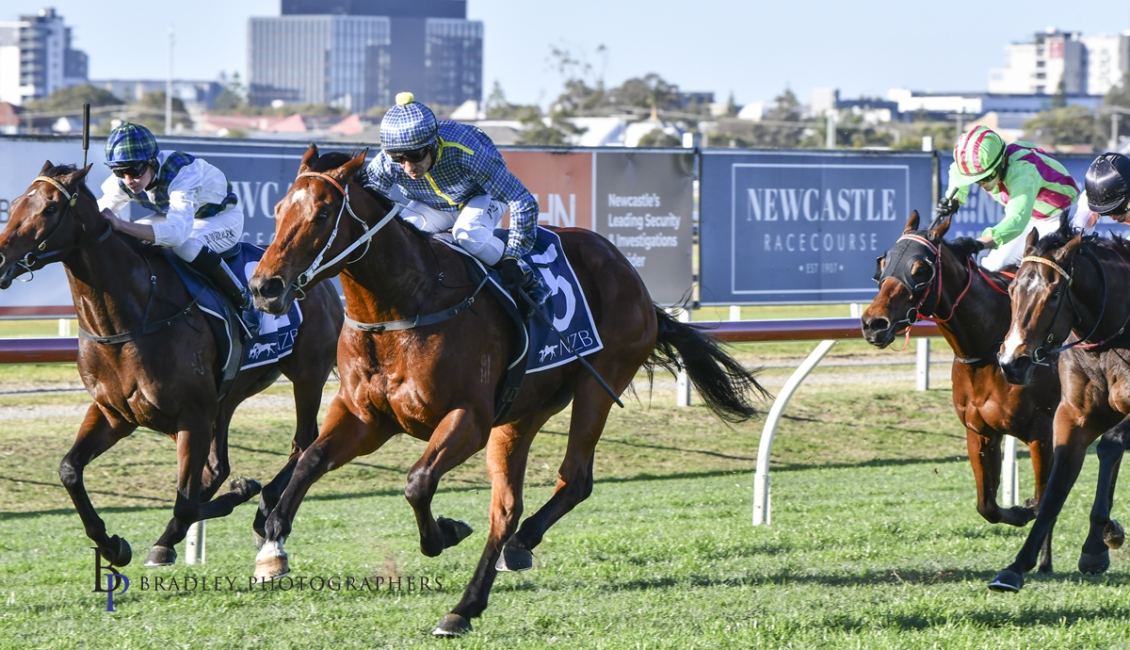 Kris Lees may have been holidaying overseas with his family, but that did not prevent his talented 2yo Flag Of Honour landing the biggest Provincial track plunge in years at Newcastle Racecourse on Saturday. The unraced gelding, owned by long time clients of the Lees stable Ron and Judy Wanless was on debut after two quiet trials.

Flag Of Honour contested the Multiplex Maiden Handicap (1200m) with Jeff Penza in the saddle. He is a son of American triple crown winner American Pharoah and was bred by Gerry Harvey. The race was run at a solid pace and the favourite settled in third last position. Penza asked the gelding to go forward near the home turn and he responded, running down the opposition to win by more than a length. Penza who has ridden Group winners for Lees was impressed.

“He was out of his comfort zone with such a solid pace, but he switched off. I had to make a long searching run on him, and he just kept coming – I put a couple around his bum late. Flag Of Honour is a 2-year-old bred to stay and he has a bright future” Penza said.

Lees’ racing manager Cameron Swan said the stable had been waiting for Flag Of Honour’s debut. “Very pleasing. We always knew he was above average, and he hasn’t been knocked about in his trials. His breeding suggests he will get over much further than 1200 metres” Swan said.

Chris Waller’s American bred mare Frumos confirmed her potential with another effortless win in the All Pro Chemicals and Coastal Fire Services Class 1 Handicap (1400m). She debuted on this track on June 11 and came from last to win by 4 ¾ lengths. On Saturday Frumos was a long odds-on favourite and the performance was similar – drop out to last, get to the outside, and power home. Frumos will probably head to a metropolitan mid-week race in the future.

The Newcastle Jockey Club race meeting next Saturday (July 2) is their last for the season. The current Newcastle Premiership standings are: