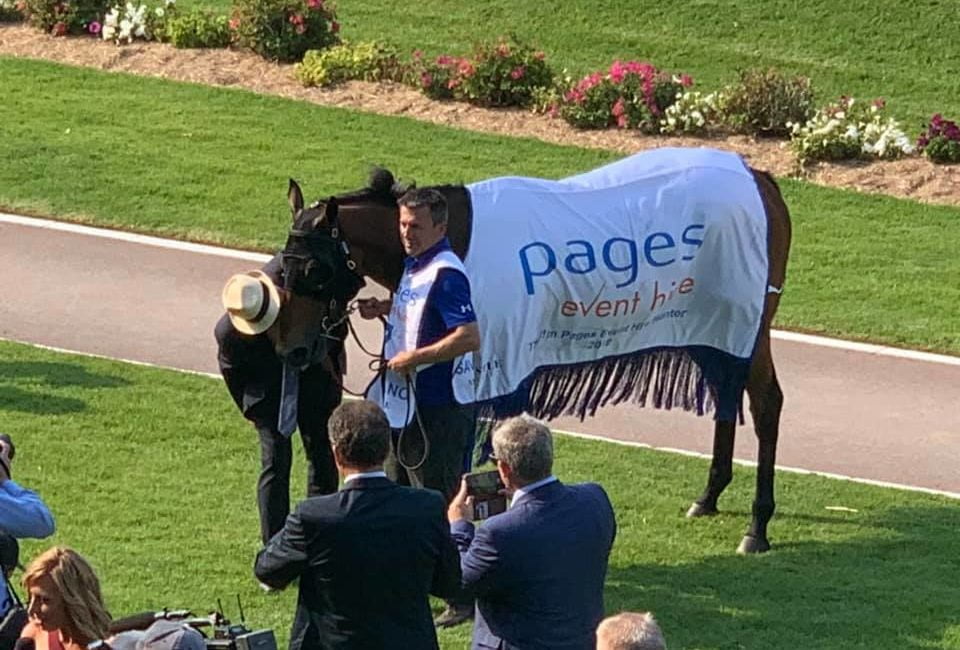 This article was written by Ray Thomas and originally appeared in The Daily Telegraph.

Champion jockey James McDonald summed up the mood after winning the inaugural $1 million The Hunter (1300m) on Savatiano at the Newcastle stand-alone meeting on Saturday.

“This concept is brilliant,’’ McDonald said.

“I was very taken by the atmosphere at Canterbury Park last night and today has been an amazing build-up, it doesn’t feel like the spring (carnival) is over.

“The scary thing about it is that normally we are all letting our hair down and breathing a sigh of relief and now it’s like keep on going every week – it is very exciting.’’

McDonald had reason to be feeling in an exultant mood after riding a double, including The Hunter, Newcastle’s richest race.

Savatiano, heavily backed into $4.60 favouritism, was superbly-rated in front by McDonald and held her rivals at bay to win by nearly a length from Tactical Advantage ($7) with Bon Amis ($19) nearly two lengths away third.

Savatiano leads all the way and @godolphin do it again! Savatiano wins the inaugural $1M The Hunter @newcastleraces_ with @mcacajamez up for @JamesCummings88! pic.twitter.com/eOfngdHfPc

The inaugural The Hunter meeting was a huge success and featured:

#Cummings also had a stakes winner at Sandown with Viridine (Doveton Stakes).

#Local trainer Kris Lees prepared The Hunter runner-up Tactical Advantage, capping a day of near misses in the Newcastle majors after seconds from Redoute’s Image in the Max Lees Classic and Game Of Thorns in the Group 3 Spring Stakes.

#Le Roman was found to have bled from both nostrils, incurring an automatic three-month ban.

“Credit to her – she had to do it the hard way” @mcacajamez glowing after riding Savatiano to win The Hunter @newcastleraces_, Greg Radley also caught up with Darren Beadman @JamesCummings88 @godolphin @bernadetecooper pic.twitter.com/v1Qaln3YNn

Savatiano scored her eighth win from 27 starts and took career earnings to nearly $1.5 million with her win in The Hunter.

“It is very deserving to get a race like this on Savatiano’s resume,’’ Godolphin’s stable representative Darren Beadman said. “This mare is quite electrifying. She has pure speed and not a lot of horses can sustain that gallop the way she can.’’

Beadman said when McDonald was able to “steal” a couple of cheap sectionals mid-race he knew Savatiano would be hard to run down.

Savatiano had won the Group 2 Tristarc Stakes at Caulfield earlier this spring before failing in the Group 1 Empire Rose Stakes behind Melody Belle at Flemington last start where Beadman said the mare had plenty of excuses.

“She was caught three-wide with no cover last start,’’ Beadman said.

“But coming back from the mile was a big advantage today because she has had that good lung-burner and she was able to really scoot away from them.’’

Australian Bloodstock’s Jamie Lovett had every reason to feel disappointed after Tactical Advantage’s fast-finishing second in The Hunter. He also races second placegetters Redoute’s Image and Game Of Thorns. However, Lovett wore the smile of a winner after The Hunter.

The second placegetter was also a @newcastleraces_ local! Here’s what Jamie Lovett @Austbloodstock had to say about Tactical Advantage for @Leesracing, who has a big group of local owners… pic.twitter.com/vEklhJ0cLo

“This raceday is unreal,’’ Lovett said. “We are proud Novocastrians and although we haven’t won a race, we have run three seconds, we feel like winners.

“The syndicate in Tactical Advantage is full of locals – the former Newcastle Knight Mark Hughes is in this horse – so it is great for them to be a part of this.

“We weren’t sure about Tactical Advantage at 1300m but when you are racing for $1 million in your own backyard we had to have a throw at the stumps.

“He’s such a genuine horse and the way he peeled off their backs late, he could be a Stradbroke horse in winter.

“For a horse that is probably not top drawer, he has now earned just shy of $1 million which shows how good the prizemoney is in NSW.’’

Lees had one of those days. Apart from this three second place finishes in the big races, he also had third placings with Zeftabrook (Max Lees Classic), Star Reflection (Prime 7 Handicap) and Juventus (Benchmarke 78 Handicap), and Le Romain suffering a bleeding attack.

Racing NSW stewards also questioned Lees about the disappointing performance of Graff and whether there had been any issue with the horse who was a noted betting ring drifter.

“I expected him to race up to his best but he was very disappointing,” Lees told stewards.

“There was no issue with the horse. I said publicly I thought he was my best chance. I’d say he will go for a spell now.’’