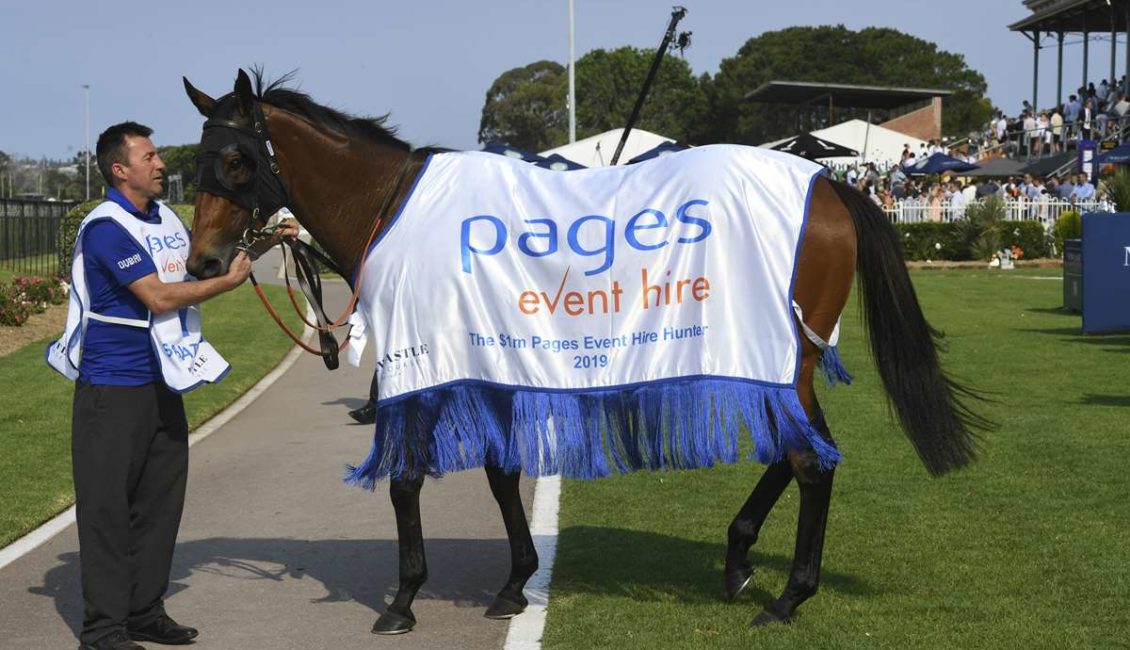 The Newcastle Jockeys Club’s first Saturday stand-alone race meeting since the 2000 Sydney Olympics and the first million-dollar race to be run outside of Sydney, went off without a hitch on November 16.

Both racegoers and industry participants flocked to the Newcastle Racecourse for the inaugural $1 Million Pages Event Hire ‘The Hunter’ with the NJC posting a crowd attendance of over 6000. The weather turned out to be perfect for the event after a devastating heat-wave around the state that set off an unprecedented bushfire emergency including significant parts of the Hunter Valley and North Coast.

Despite the heat in the lead up, the track was in first-class order and raced accordingly, receiving high praise from Sydney’s top jockeys and trainers. The quality of the fields on the day reflected the high opinion all metropolitan stables have for the superior racing surface at Broadmeadow.

Godolphin’s trainer James Cummings prepared the winner of the two major races, The Hunter and the Group 3 New Zealand Bloodstock Spring Stakes. Cummings had commitments in Melbourne on the day and Darren Beadman represented the stable at Newcastle.

Bonnie mare Savatiano was clearly the best backed in The Hunter and she was given a gun ride by James McDonald from her wide draw. “J. MAC” allowed Savatiano to cruise across to take up the lead on the rail and she settled beautifully under the Kiwi hoop. McDonald then got away with a couple of cheap sectionals from the 1000 to the 600 which allowed the mare to give an unbeatable kick at the top of the straight.

Savatiano took her earnings to close on $1.5 Million on Saturday. She was a $5 chance and relegated the Novocastrian pair in Tactical Advantage ($7) and Bon Amis ($19) into the minor placings. Tactical Advantage, trained by Kris Lees, was backing up from a Flemington Spring Carnival win and was outstanding in coming from third last at the 400.

Bon Amis was gallant first up and trainer Jason Deamer was rapt in the effort.

Godolphin won its third Group 3 Spring Stakes in succession when filly Asiago held off a fast finish from Lees’ Game of Thorns. Neglected by punters Asiago ($21) sat outside the leader Rule the World ($2.10) before taking the lead in the straight.

Game of Thorns ($21) savaged the line to go down by half a neck, with Donandkim ($2) a half a length away third.

Beadman singled out the winning jockey Rachel King for special praise. “Rachel rode Asiago superbly. She controlled the race when she followed Rule the World across early. She then got Asiago into a nice rhythm. Great ride and a quality win” Beadman said. Asiago is only the fourth filly to win the Spring Stakes since it was first run in 1987.  Godolphin won the race with Aramayo (2018) and Astoria (2017).

The remaining feature race was the 900m Sage Painting Max Lees Classic for two-year old’s. It was the third running of this special race, the brainchild of NJC boss Matt Benson, which recognises the contribution to racing of Newcastle’s most successful trainer – who won 20 Group 1 races. A small but high-quality field of juveniles faced the starter.

Kris Lees had two promising two-year old’s in the race, but it was the training partnership of Peter and Paul Snowden who again saddled up the winner. Tilia Rose, a beautifully bred Written Tycoon filly, raced on the speed then held off the luckless Redoute’s Image which was stranded three-wide and facing the breeze all the way.

The runner up is trained by Kris Lees, as is the third placegetter Zeftabrook.

Paul Snowden was very impressed with the winner. “It was good to see her jump, travel and quicken under pressure in her first race start. She is not just a short course whippet and has some gears to go through. She will be better over further. Tilia Rose has trialled well and she has a good attitude” Snowden said.

The Newcastle Jockey Club left no stone unturned to ensure the history making day was a huge success. The Sydney media ‘pack’ were full of praise for the facility made available for them on the day and the coverage of the meeting on the television, radio and the local newspapers, including The Newcastle Herald, was outstanding. Racing NSW Chief Executive Peter V’Landys was the special guest speaker at a fundraising lunch for the Westpac Rescue Helicopter Service the day before The Hunter Raceday, and he heaped praise on the Newcastle Jockey Club for the way the staff worked together to guarantee that this inaugural event would be such a success.

V’Landy’s walked into the mounting yard midway through the meeting and looked back into the big crowd. The smile on his face summed it up.

Clare Cunningham’s So Bizarre was heavily backed to win the Jungle Juice Cup and he went to the barrier as the $1.80 favourite. He raced in the first three before tiring to finish seventh.

Tuncurry nine-year-old Profiler backed from $51 into $26 stormed home to win by a length and a half from Port Macquarie trained Wanna Be A Jeep ($7.50) and Sausalito ($4.40). David Callaughan trains the winner and it was Profiler’s first win in six starts for the Tuncurry trainer. Profiler had three previous homes, starting out with Grant Allard before heading north to Stephen Lee at Ballina, before returning to the Central Coast under Jeff Englebrecht at Wyong.

Callaughan said Profiler joined his stable around four months ago. “We knew he had the ability and it was just a matter of tapping into it. I backed him at $51 so I am over the moon,” Callaughan said.

Rachael Murray rode the winner after Darryl McLellan was ill and did not ride at the meeting.

Wyong stayer Weston set a 2125 metre course record in winning the Cessnock Cup. The previous record of 2-09.88 was established by Rhyno Chaser on March 10, 2014. Weston, trained by Wayne Seelin posted a time of 2-09.34. Serg Lisnyy was aboard the winner and it was the jockeys third Cessnock Cup win.

Tactical Advantage won the listed MSS Security Handicap on Melbourne Cup Day with Damien Oliver onboard. The sprinter started his career with James Cummings then went to Joe Pride before joining the Lees stable. He won the 2019 Takeover Target at Gosford in January.

Irish apprentice Tom Sherry rode his first Provincial winner at Newcastle on November 2. He gave a polished display on the Matthew Smith trained Koonunga in a 900 metre Benchmark 70. “I am so happy to notch up my first provincial win in Australia. I jumped at the opportunity to join Mark Newnham and with my partner Danika, we packed our bags and headed down under. We are so happy and Mark has been terrific”. Sherry said at Newcastle.