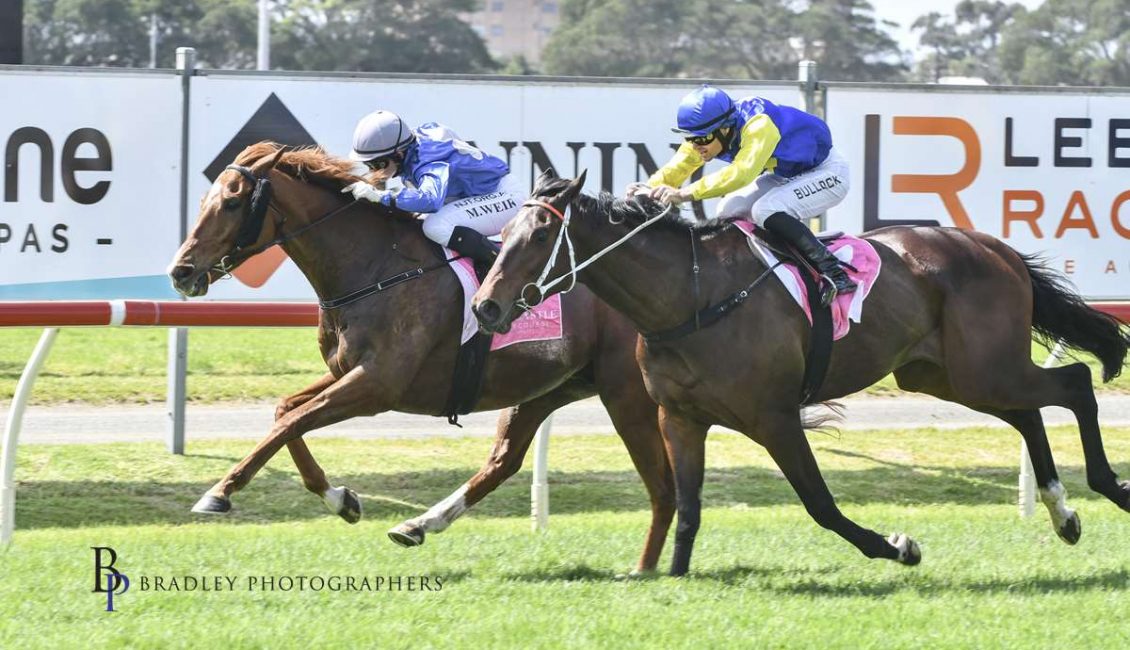 Branxton stayer Yuralla Boy confirmed his affinity with the Newcastle racetrack when he won the Red Funnel Ladies Day Cup (2300m) feature race of the second day of the Newcastle Jockey Club’s Spring carnival on Saturday.

Yuralla Boy backed from $12 into $9 was given a peach of a ride by apprentice Mikayla Weir to beat the $1.75 favourite Continuation by a head. The apprentices’ master Todd Howlett trains the six-year-old for his uncle Max Howlett and Saturday’s win was the geldings seventh and his prizemoney tally soared past $150,000. Yuralla Boy was purchased for $12,000 at a Scone Yearling Sale.

Backers of the runner up Continuation can consider themselves unlucky not to collect as the stayers jockey Aaron Bullock dropped his whip inside the 100 metre mark. Todd Howlett was not on the track at Newcastle as he was at Randwick with his smart four-year-old Toto which finished third behind Scone galloper It’s Me in the Highway Handicap.

Howlett was home on his Lower Belford property when contacted on Saturday night “Newcastle is the horses favourite track and he has won three from five there. I wasn’t that confident as he never gave a yelp in the Tuncurry Cup last week on a soft 7.

Yuralla Boy has performed well on good and dry tracks and today’s track was perfect for him. I will take him bac to Newcastle for a similar race in two weeks. Toto was unlucky not to finish second in the Highway today and my Koscuizkio runner Two Big Fari trials on Wednesday at Newcastle,” Howlett said.

Bullock who was apprenticed to Howlett in his younger days bounced back from the narrow defeat of Continuation earlier in the day to finish the meeting with a double. The Singleton boy got down to 57½ kilograms to steer Wyong three-year-old Ushindi to a 4½ length win in the 1250 metre Maiden Plate.

Tracey Bartley trains the gelding which was on debut and he is very promising.

Kris Lees rounded off a successful Spring Carnival when his $15 outside Chalmers won the final event the 1400 metre Benchmark 64 Handicap with Bullock aboard.

Legendary Rugby League caller David Morrow is a part owner of Chalmers which has won close to $300,000 on this track.

The 2020 NJC Spring Carnival will go down as the most successful in recent years.

The track played magnificently over the two days with some of Australia’s leading trainers and jockeys full of praise for the track which Randwick trainer John O’Shea declared as “The best in Australia”.