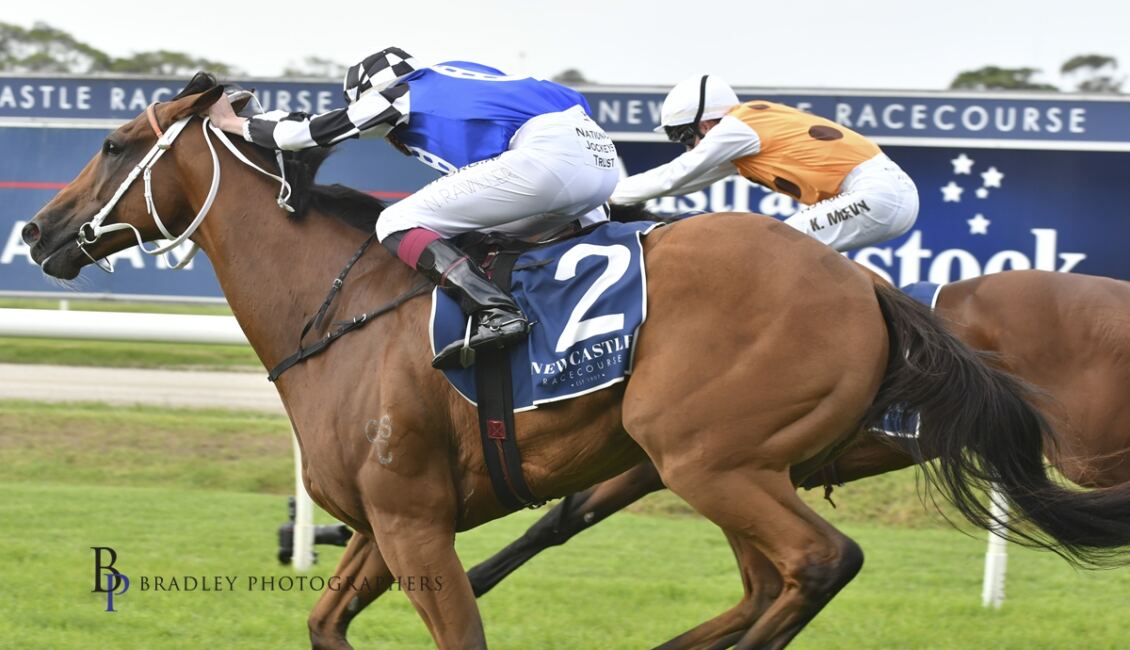 Newcastle’s Hall of Fame trainer Kris Lees recent domination of the Group 3 Suez Newcastle Newmarket continued on March 5 when the richly talented Gem Song came with a storming finish to snatch victory in the shadows of the post.

Proceedings for the 2021 Newmarket Day began on a soft 5 track before being upgraded to a Good 4 prior to the running of the feature with no rain during the day. 20millimetres of rain fell on the track two nights before the meeting however, Tommy Berry heaped praise on the track in an interview with Sky Thoroughbred Central during the day. Gem Song had resumed from an injury enforced 14 month spell in the Group 3 Southern Cross at Randwick on February 13. The gelding ran on strong to finish 2.4 lengths from the winner.

He was heavily backed into $4.40 in the Newmarket however, backers were shocked to see the five-year-old a clear last when the gates opened.

Nash Rawiller then drove him through to midfield one off the rail with a nice trail. Once in clear running, around the 250 metre mark, Gem Song sprinted quickly and he nailed the $3.80 favourite Bottega on the line.

Topweight Cascadian ($4.60) was a length away third. The win took Gem Song’s prizemoney to $633,000 from seventeen starts. It was Lees third Newcastle Newmarket win in succession and all three winners carried the colours of Newcastle premier trainers biggest clients Australian Bloodstock.

Gem Song was bred by Gooree Park Stud and he carried their colours when he won the 2019 Eskimo Prince and Gunsynd Classic and was placed in the Theo Marks and Shannon. He broke down in the 2019 Golden Eagle.

Lees paid $40,000 for Gem Song at a Gooree Stud dispersal sale and Australian Bloodstock and Lees Racing manager Lucas Miller, and the trainers friend Steve Pringle took shares in the horse. Lees was elated to win another hometown Group event.

“This horse suffered a suspensory ligament injury in the Golden Eagle but I thought so much of him I wanted to buy him and gamble on him returning to his best. You hold your breath when horses come back from a major injury but he has been good.

I could have him run during the Summer but i wanted to keep him for the softer tracks in the Autumn. There are some good people in the ownership. Obviously, Australian Bloodstock are a massive supporter of our stable and a couple of my mates have shares.

I have nominated Gem Song for the Doncaster and I will see how he progresses,” Lees said.

It has been a huge season for Lees on his home track with Mugatoo winning the trainers first ever Newcastle Cup in the Spring and now the Newmarket.

The late/great Tommy Smith, trained Seacraft to win the first Newcastle Newmarket in 1955. The highest profile galloper to win the race in recent years was Happy Clapper in 2017.