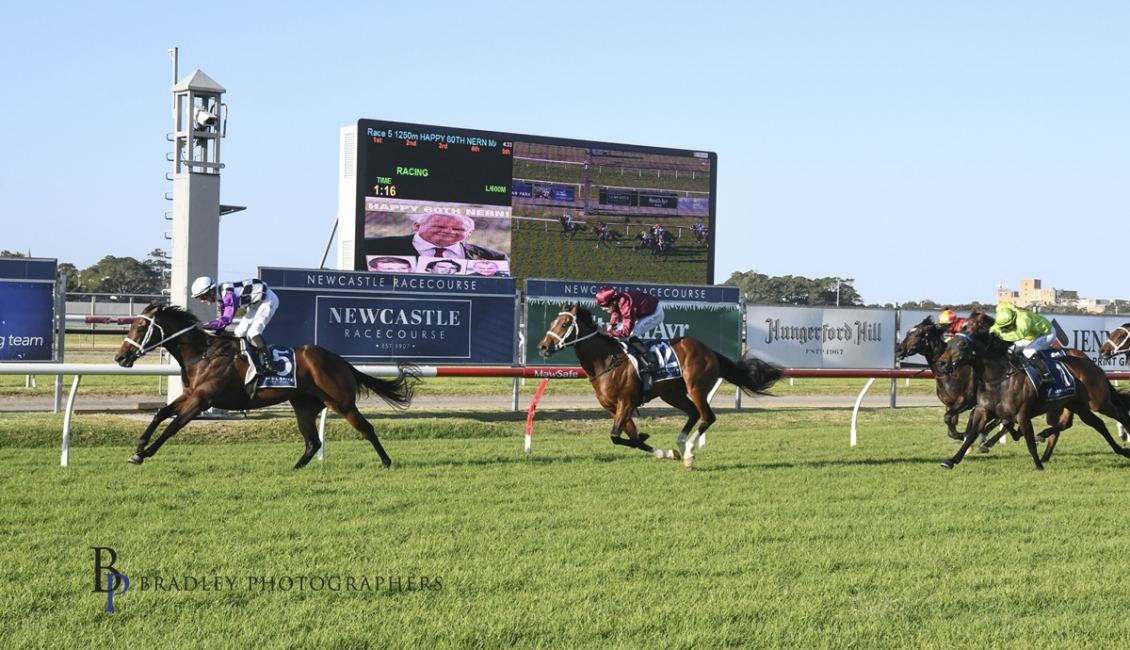 Talented Victorian apprentice Thomas Stockdale can thank Racing NSW stewards for his all the way win on the Chris Waller trained Fastconi at Newcastle Racecourse on Saturday. As predicted in Saturday’s Herald, Sydney’s Champion trainer had provided his new apprentice with a golden opportunity to win on his first trip to Newcastle aboard Fastconi.

Massive traffic delays on the M1 between Sydney and Newcastle due to holiday traffic and an accident saw some jockeys and horse transporters struggling to arrive at the track on time to fulfill their commitments. Stewards were advised during the meeting that five horses in race 5 the 1250 metre Maiden Plate would not arrive at the track in time. The three Waller trained horses Fastconi, Tuscane Gaze and The Elanora with Bjorn Bakers Deel With Me and Richard Litt’s Luftwaffe were the gallopers involved.

Stewards, aware that the first four favourites in race 5 were on the floats wisely put the race back one race time slot.

Stockdale breathed a sigh of relief in the jockeys room when he heard the news that his only mount for the day Fastconi would run. Waller quinelled the race with Fastconi ($3-40) and the strong finishing Tuscan Gaze ($6-50).

The winner led all the way to win by 1.3 lengths. The fresh-faced Stockdale as expected was a happy man following the race. “So happy to win on this magnificent Newcastle Track at my first ride here. Fastconi had an easy time up first and although he was looking around a bit he always had the race under control. I only moved to Sydney a few weeks back and I love it. I am apprenticed to my cousin Shane Stockdale at Pakenham and it was three or four months back that the Waller stable offered me an opportunity to come to Sydney. I had bought a home in Victoria and it took me some months to decide. Today was my 127th win and I will be riding at Randwick next Saturday,” Stockdale said.

Track specialist Holy Reign stormed home to win the 1300 metre Benchmark 68 Handicap. The Kim Waugh trained five-year-old has been in great form on the Newcastle Track. Three starts back Holy Reign came from last at the top of the straight to win by 2½ lengths on this track. Last start two weeks back the gelding was held up twice before he flew home to go down to go down by a neck. Holy Reign has had three wins and four seconds from nine starts at Newcastle. Holy Reign will now head to the paddock for a three month break.

Randwick trainer John O’Shea landed a double and one of his winners Lions Roar is heading to the Group 1 Spring Champion Stakes at Randwick next Saturday. O’Shea’s promising stayer Sophomore opened the day with an authoritative win in the 1600 metre Class 1 Handicap. Lions Roar, the long odds-on favourite had to fight hard to beat Sapphires Son in the 1870 Metre Benchmark 64 Handicap. The winner has won three of his four starts.