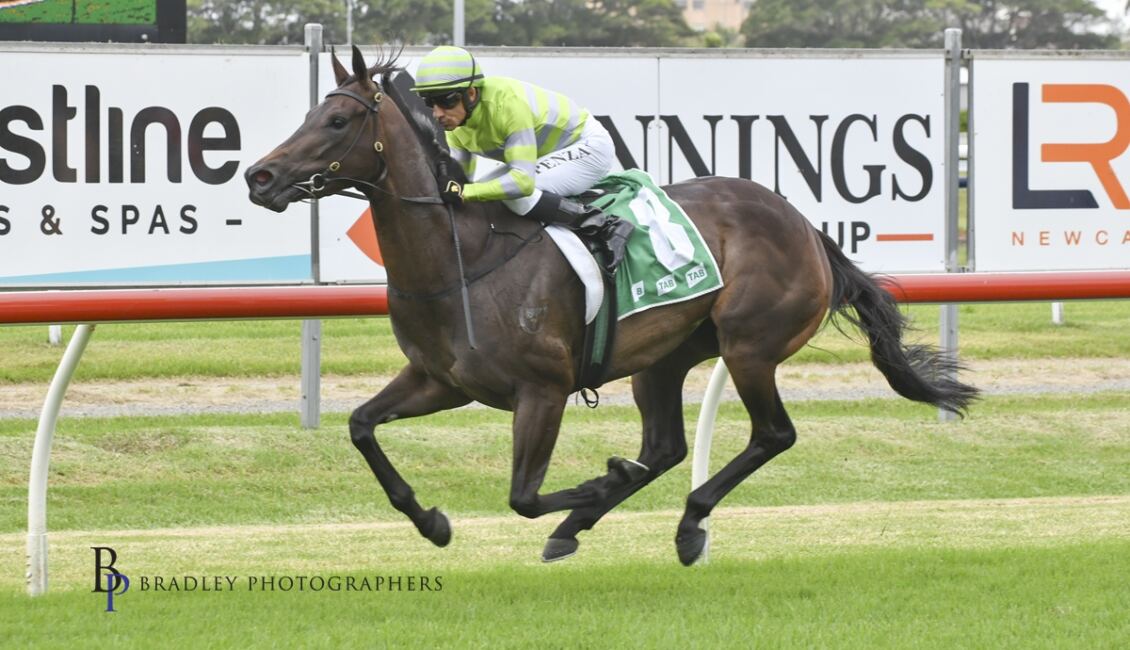 Former jockey Ben Vassallo who part owns boom 3 year-old filly Black On Beauty was on track at Newcastle on Saturday to see the daughter of Zoustar make a triumphant debut in the Newcastle Stevedores Maiden Plate 1200m.

Black On Beauty is a half-brother to Black On Gold the winner of more than $1.4 million on the racetrack. After two recent Randwick trial wins the filly was a street corner tip on Saturday and jockey Jeff Penza made his intentions clear when the barrier stalls opened.

Black On Beauty began quickly and Penza let her stride determined to hold the inside running. He held her together until the top of the straight when Penza gave her full rein at the ‘300’ Black On Beauty put five lengths on the nearest challenger. On the line she had more than two lengths to spare from Hadouken and Famous Pedrille.

Vassallo races the winner in partnership with BK Racing and Breeding PTY LTD a company of which he is a racing manager. “It is a great thrill to finally see this filly get to the races then win so easily. Black On Beauty is in her third preparation but this time she has indicated that she is something special.

James McDonald rode her in her last Randwick trial and she won by 5 lengths. James gave her a huge wrap and he told our trainer John O’Shea to kick off her career in a 1200 metre Maiden and he suggested that she would eventually run 1600m. We bought Black On Beauty at an Inglis Easter Yearling Sale and the boss raced her half brother Black On Gold” Vassallo said.

Penza told Vassallo that Black On Beauty would have won much easier only that she pulled up when she heard the loud cheers from the crowd at the 200 metre mark. The winning owners were again successful in the following race The Beauford Hotel Maiden Handicap 1600m

The New Zealand bred Lekvarte was trapped three wide no cover for the trip and still won convincingly. The winner is trained by Joe Pride and ridden by Mitch Bell. Penza was the leading rider on the day with a treble- Black On Beauty, Classic Train and Clearly Regal.

Hawksbury filly Rita May landed a good plunge when she led throughout to win the opening event the In Memory Of Clifford William Marsh Maiden Plate 900m. Named after a Bob Dylan song Rita May was raced nicely up front for Mikayla Weir and she won by more than two lengths. Gary Frazer trains the promising filly a daughter of former Kiwi star Extravagant.

The meeting attracted a full house of around 4000 under the covid restrictions and it was a successful fundraiser for the Westpac Rescue Helicopter Service.