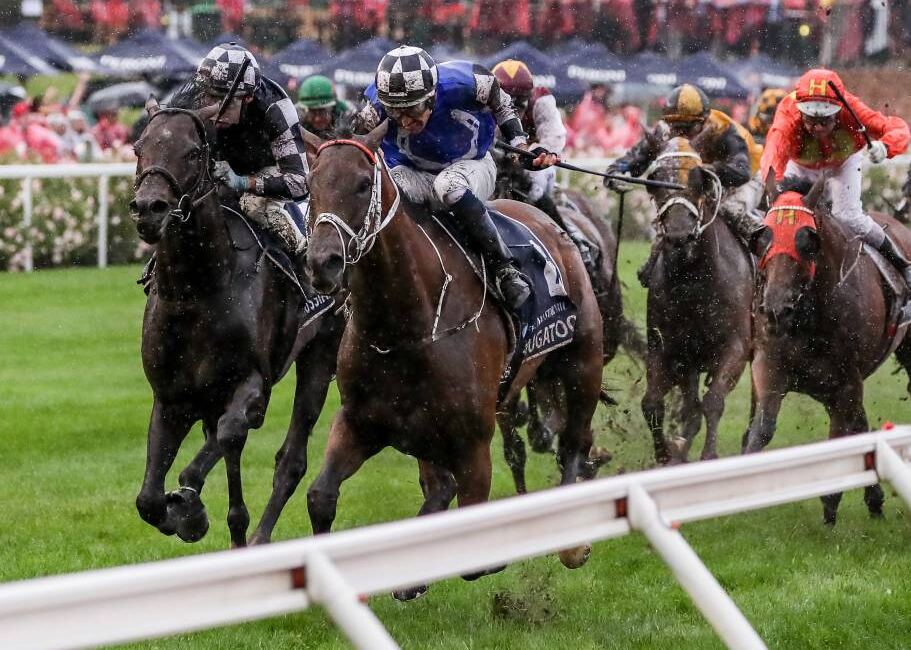 Australian Bloodstock director Luke Murrell believed his syndication’s colours and their main trainer, Newcastle’s Kris Lees, were due some luck in a big race.

So on Saturday at Moonee Valley when All-Star Mile favourite Arcadia Queen was scratched, then the heavens, and a gap in the straight, opened for stable star Mugatoo, it seemed like their fortunes were finally balancing out.

Mugatoo did the rest, powering to victory in the $5 million race to hand Lees and Australian Bloodstock one of their biggest wins.

A proven wet-track performer, Mugatoo travelled nicely behind the lead but jockey Hugh Bowman struggled to find an opening on the home turn.

The space appeared as they straightened and Mugatoo relished the Soft 6 surface to outsprint Russian Camelot to a half-length win. The track was a Good 3 before the rain came, just in time.

“I kept looking at the sky all morning waiting for it to come. Certainly, it enhanced our chances,” Lees said on Saturday.

The win sparked emotional celebrations trackside for Lees’ team and connections back in the Hunter.

“It’s really good for Fred,” Murrell said of Lees on Sunday. “We’ve had so much bad luck in some of those big races. Just little things … he could have won five or six of them and you walk away with nothing.

“Finally we had a bit of luck when the gap opened up, and it’s a different result.”

Mugatoo has been a revelation under Lees after a wind operation in the UK in 2019 delayed his move to Australia. He gave Lees a first Newcastle Cup last September, then was runner-up in the group 1 Metropolitan and a luckless fourth in the Cox Plate.

For Lees, the $2.25 million cheque on Saturday was second only to Lucia Valentina’s $2.4 million payday in the 2016 Queen Elizabeth Stakes at Randwick.

Australian Bloodstock’s highlight is winning the 2014 Melbourne Cup with Protectionist, but Murrell said the All-Star Mile success was special for how far six-year-old Mugatoo had come from two wins in six UK starts.

“He wasn’t an obvious one when we bought him,” he said. “He was a bit left field and you probably get a bit more enjoyment out of those ones because they are not the unbeaten horse or one that’s just won a big group race.

“He’d basically won nothing so to win the richest mile race, it’s a really good result.”

Murrell said Mugatoo would now go to the $4 million Queen Elizabeth Stakes (2000m) at Randwick on April 10 then possibly the $1.2 million Q22 (2200m) at Eagle Farm on June 12. That would leave a short let-up before another Cox Plate campaign.

“It’s four weeks, he goes really good fresh and he had a fair bit of improvement in him,” he said. “Hopefully there’s something left in him, but he’s won nine from 18, so he’s a line-chaser and a winner.”

Lees said on Saturday: “To get a quality horse like this come into your stable is every trainer’s dream. I’m very fortunate.”

He described the win as one of the biggest thrills of his career. “The race has been really well received, and the roar went up when the gates opened, even with a restricted crowd,” he said.

“It is putting its footprint on racing now. It’s right up there, a great concept and great to be a part of it.”